People often ask us about energy self-sufficiency. Just how hard is it to get to that point where you no longer have to pay a large corporation each time you turn on the kettle?

This will depend on your usage patterns but for most people, a mix of renewable systems is the best option.

This means that Gabriel’s electricity demand is quite a bit more than most!

His house is heated by a heat pump, coupled with under-floor heating. He has solar thermal which assists the heat pump with heating his hot water. Gabriel also has a solar PV system coupled with a battery system, which has a total capacity of 13.5 kW.

Gabriel has SolarEdge monitoring set up, which allows him to monitor his usage, his solar PV generation and his battery usage.

The screenshot below shows an April day for Gabriel’s system. April’s been fairly sunny but also quite cold, which is actually good for solar PV system output. Over the course of April, on average Gabriel’s systems have provided his house with almost 90% of its electricity needs. 70% of the energy he’s actually used has been contributed by the battery system, rather than directly by the solar PV. This makes sense because he’s usually out during the day at SunGift headquarters. 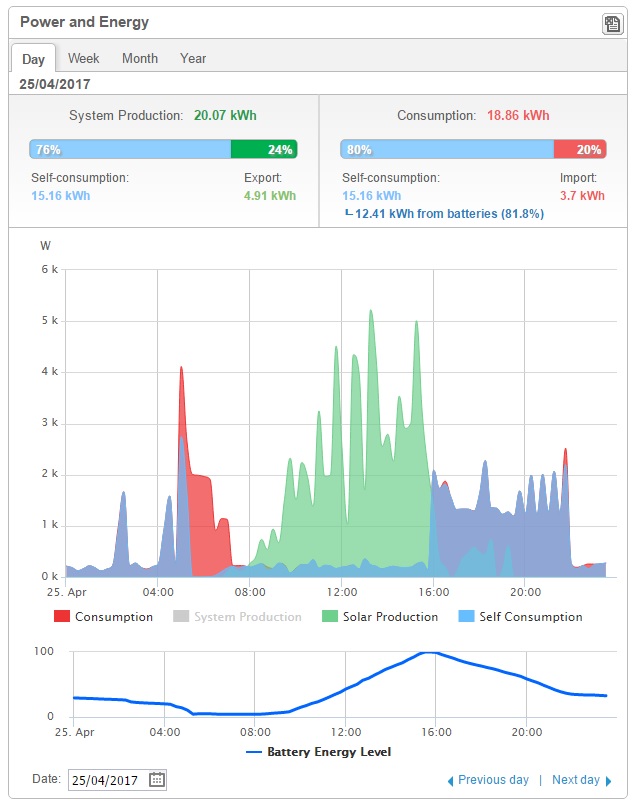 In the graph, the green shows solar generation, which as expected peaks in the middle of the day.
The blue peaks show energy being used from Gabriel’s battery. So that’s stored solar energy being used after its been generated. The red patches show where energy has been imported from the grid, because the solar PV isn’t generating and the battery is empty.

So, the upshot is, if you’d like to move towards self sufficiency a mix of renewable is generally best, particularly solar PV coupled with a battery system.

If you’d like to discuss your options call us on 01392 213912 or email us on designteam@sungiftsolar.co.uk.